The Southern NH Trailblazers (SNHT) formed as a non-profit group in October of 1968 by a few men with a desire to start a local club in the Kingston area. We joined, as a club, the newly formed New Hampshire Snowmobile Association (NHSA) and have been very active in the snowmobile community ever since.

Over the years members of SNHT have served as NHSA County and Assistant County Directors, NHSA Race Into Winter committee staff, and even as past NHSA President. We have always been a major contributor to the Easter Seals Camp Sno-Mo charity drive, and are proud to have always been on the top 10 charity donation list of all NHSA clubs.

SNHT has been teaching approved NH Fish and Game Department OHRV safety education classes for over 40 years. This classes have incredibly successful events, for the club, and will continue to be, year after year.

Our groomer fleet began in the 1970s with Ski-Doo Alpines and home-made drags. We currently have a Piston Bully groomer with a Mogul Master custom drag. In addition to the groomer, we have a Skandik with drag to handle our local trail grooming needs. 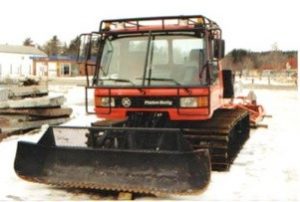